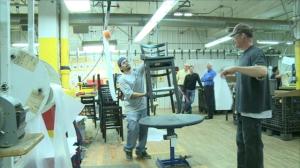 Grand Rapids in the early part of the 20th century was the center of the fine furniture industry (eg Baker, Widdicomb)….partly because it was close to a major raw material source….hardwoods….and skilled craftsman . Later on that industry moved to North Carolina….again close to plentiful hardwood supply.

Many of our suppliers still came from Grand Rapids….though North Carolina/Virginia/Mississippi manufacturers became more prominent in the 70’s.

It’s nice to see a company like Grand Rapids Chair again in Grand Rapids….though in a somewhat different industry segment. Established in 1997 by Dave Miller, a former executive with John Widdicomb, Inc….Grand Rapids Chair is a provider of chairs and tables to institutional and commercial customers. Their products are nicely designed and manufactured in their Grand Rapids factory. 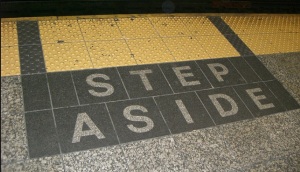 One of the more difficult aspects of leadership is knowing when to step aside. Often leaders in businesses/organizations tend to not want to give up their leadership/executive roles. In many cases they do have the experience….so they give value to the organization.

At times, when leadership changes hands….experinece gained is sometimes lost….mistakes made….yet an organization learns from mistakes.

The military in some ways does it right….leaders continually move upwards….experienced leaders step aside after a 2 or 3 year assignment for the next generation of leaders. After a long career…..the senior leaders retire. Younger officers know that if they do well….they will always (for the most part) be moving forward.

The challenge than is to know when to step aside.

+ On the path from awareness to a sale, the marketer has to create a vacuum. – Seth Godin

+ Merely giving the people what they want is a shortcut to mediocrity and invisibility. – Seth Godin